TomTom Digital Cockpit supports theming of the UI. This enables IVI systems built on top of TomTom Digital Cockpit to have a customized look and feel which is aligned with the branding, make or model of the vehicle and which is consistent across the entire system. It also allows the system to support runtime theme switching, enabling the possibility of allowing the end-user to change the look of their UI while they are using their IVI system.

A theme is composed of styles which are divided into theme categories. Each category focuses on an aspect of the visual user interface such as colors or spacing between UI components. This page describes how to add themable UI controls and the theming system in detail.

How to Implement a Themable UI

TomTom's Digital Cockpit's theming mechanism makes use of Android's stylable XML attributes and Android styles. The rest of this guide assumes a basic understanding of these concepts.

A theme is divided into theme categories, each of which consists of a list of Android XML attributes which can be used to set the styling of a specific aspect of the UI, such as the color of some text. When implementing the UI, the developer can select attributes from the appropriate category instead of hardcoding a value into their layout XML.

Examples of the built-in theme categories include:

For example, inside TtThemeCategoryColors, there is

As described by its documentation, the tt_surface_content_color_emphasis_high attribute should be used when styling a UI content whose color should indicate to the user that it is important. This attribute can be used as the value of android:textColor when styling a TtTextView. More detailed information on how colors are organized in the theming system is available in the Color System section.

For example, if we were adding an important title to the UI, this attribute could be used to set the text color:

Alternatively, to style multiple buttons in the same way, the attribute can be used in an Android style:

The use of these attributes is core to ensuring that the entire UI of the IVI system is consistent and changes consistently when the end-user changes the UI theme at runtime.

To change the actual values of these attributes (and hence the look of the UI), see the section Customizing the Built-In Themes

TomTom Digital Cockpit also provides a UI controls library consisting of a number of UI controls that extend what is available by default in Android. These also help with producing a themable UI and it is advised to use them where possible.

In the Color System section we'll explain how TomTom Digital Cockpit classifies background colors and emphasis, among other things, to achieve a coherent UI design.

Some examples for color attributes are:

Note: All attributes defined within the same prefix_what_where_... are called a group.

Most theme attributes refer to a very specific aspect of the UI such as the color of the content in a panel. However, some of the attributes in a theme have more of a global scope and refer to a general part of the UI. These attributes are referred to as global tokens or global attributes.

For certain global attributes the naming convention is based on a baseline value. The baseline value is specified as the suffix of the attribute name, for example, it is the _1 in tt_size_1.

The naming convention is composed of the following parts:

The common naming convention is applied for the following categories in the built-in themes:

TomTom Digital Cockpit comes with some pre-defined themes including a dark and a light theme. The theme can be customized by deriving a new theme from the existing one and overriding the existing values of these attributes in the new theme.

For example, to create new light and dark themes which are based on the build-in TomTom Digital Cockpit themes, the following XML can be used:

All UI controls which use these attributes will get the defined value when the theme is changed.

TomTom Digital Cockpit's theming mechanism is heavily based on Android's theming approach, while additionally providing a means to switch themes at runtime through a service. The Android styles within the theme are applied to the context of the system UI. All the fragments hosted in the system UI will get that context with the correct styles applied. Similarly, when a theme changes at run-time, like when switching between light and dark mode themes, all views are created with a new context that has the new styles applied.

The theme is provided by the ThemingService. This service is responsible for deciding which theme should be used by the system UI. It loads the styles that themes can use from all discoverable ThemeComponentProviderService instances. (You can read more on discoverable services in the documentation on IviDiscoverableServiceIdProvider.) You can add your own instances, or replace the default one with custom instances that provide alternative styles.

Note: The ThemingService works with IviThemes, which are explained in detail in the Customization section.

The styles must provide values for all attributes within their respective categories. Failing to do so will result in unexpected behavior as the views are missing some of their attributes. The available attributes are defined within the platform_theming_api_common_attributes and core_theme modules.

The core_theme is a TomTomAndroidTools module which defines common theme attributes that can be used in various projects. The platform_theming_api_common_attributes module, which extends core_theme, also defines extra theme attributes for TomTom Digital Cockpit. You can customize the visual appearance of your product by providing the desired values of these attributes.

If you want a look based on the TomTom UX design specification, you can use the platform_theming_api_stock_theme. This theme supports a light and a dark mode. The dark mode is the default one for TomTom Digital Cockpit.

The appearance of the UI is determined by colors, margins, font types, etc. A theme is divided into categories for each of these aspects of the UI. To reduce duplication when creating a new theme and to be able to apply styles independently, these attributes are defined in categories like color, spacing, and font. Each category represents a set of attributes for the theme.

The color system helps you to apply colors to your UI, including your brand colors. Colors provide a hierarchy of information, give the correct meaning to UI elements, and meet legibility and contrast standards.

The TomTom Digital Cockpit color system is designed with a focus on: hierarchy, background colors, content colors, and emphasis.

UI colors are based on the role they play in the interface. For example, the color of the surface will determine if the UI as a whole is light or dark.

By defining which colors can go on top of each other, you can ensure enough contrast to distinguish UI elements.

The background colors are classified into:

Content colors refer to the color of elements that are displayed on top of the background colors. Whenever UI elements such as texts or icons appear on top of these colors, they will have a different emphasis to create an order between them. 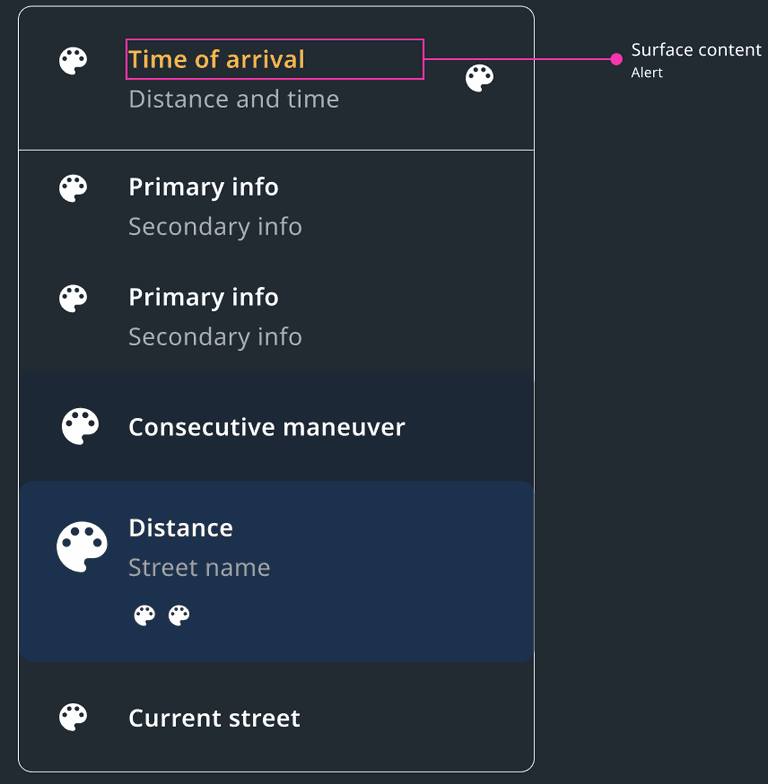 A UI consists of many components. The fewer components, the easier it will be to understand what is being communicated. However, sometimes it cannot be avoided to have more components and then emphasis is used to make some of them stand out and become the focus of the user.

Emphasis is classified into:

Here we'll dive deeper into the way you can customize your product using the tools that theming provides.

An IviThemeComponent contains the necessary style information and it belongs to a single IviThemeCategory. The theme component styles are defined as Android style resources. For example, a Noto Sans font style is defined as:

First you need to define styleable attributes for a category. Next you can define a style for it, which will be used by an IviThemeComponent later.

Let's use an example to demonstrate the creation of a custom theme. TomTom Digital Cockpit extends color attributes like tt_surface_content_color_emphasis_high which are defined in stock_theme. It is defined like this:

And there is a default value for that color attribute in stock_theme as well:

The TomTom Digital Cockpit style TtiviThemeColorStock inherits from the style TtThemeColorLight and there you can define the value you want for your theme:

Note: You can have multiple styles for the same theme category. For example, it is common to provide light and dark modes as user options. So you can define a light and a dark color theme, and let the user choose.

You can define a different value for the same attribute in another theme:

In code, the color category is defined as: