Last December, I was in Porto, Portugal visiting a friend for her birthday. I took the cab from the airport to her house and on the way, the driver was struggling to find the correct route. We stopped and turned multiple times and he was smiling uncomfortably at me in the mirror. Meanwhile, the meter kept running. By the time I got to her apartment, it had hit the 40-euro mark.

It made me think about the all-too-familiar tale about taxi drivers taking unnecessary long routes in order to increase the fare. I used to think it was just a myth, as most taxi drivers use navigation and, I presume, make more money on pick-up fees and tips (in other words, short and frequent rides). So, I was set on finding the answer to this burning question: do taxi drivers take unnecessarily long routes?

Luckily, it was not hard to find a public dataset on taxi trips in the city of Porto and, working at TomTom, I was already aware of the public APIs the company offers. Combining the two and with the help of my colleague Sander, I was able to fit the pieces of the puzzle.

Let me show how we got to our results! Here are the steps we will go through:

We will be using a Python Jupyter Notebook for this exercise.

As you can see, there are almost two million taxi trips recorded in the dataset. This data enables us to say something about the overall behavior of taxi drivers in Porto.

Making an assessment: Each of these trips have a record of a corresponding polyline (trajectory). We can plot the trajectory on the map and, by using the TomTom Maps APIs, check if it corresponds to the fastest route

You can request your own API key on the TomTom Developer Portal, which gives you 2,500 free API calls a day. This is more than enough to get a good idea of whether taxi drivers are frequently taking detours or not.

To request an API key, you need to:

We use an open source library called folium () to display the TomTom map within our Jupyter notebook. 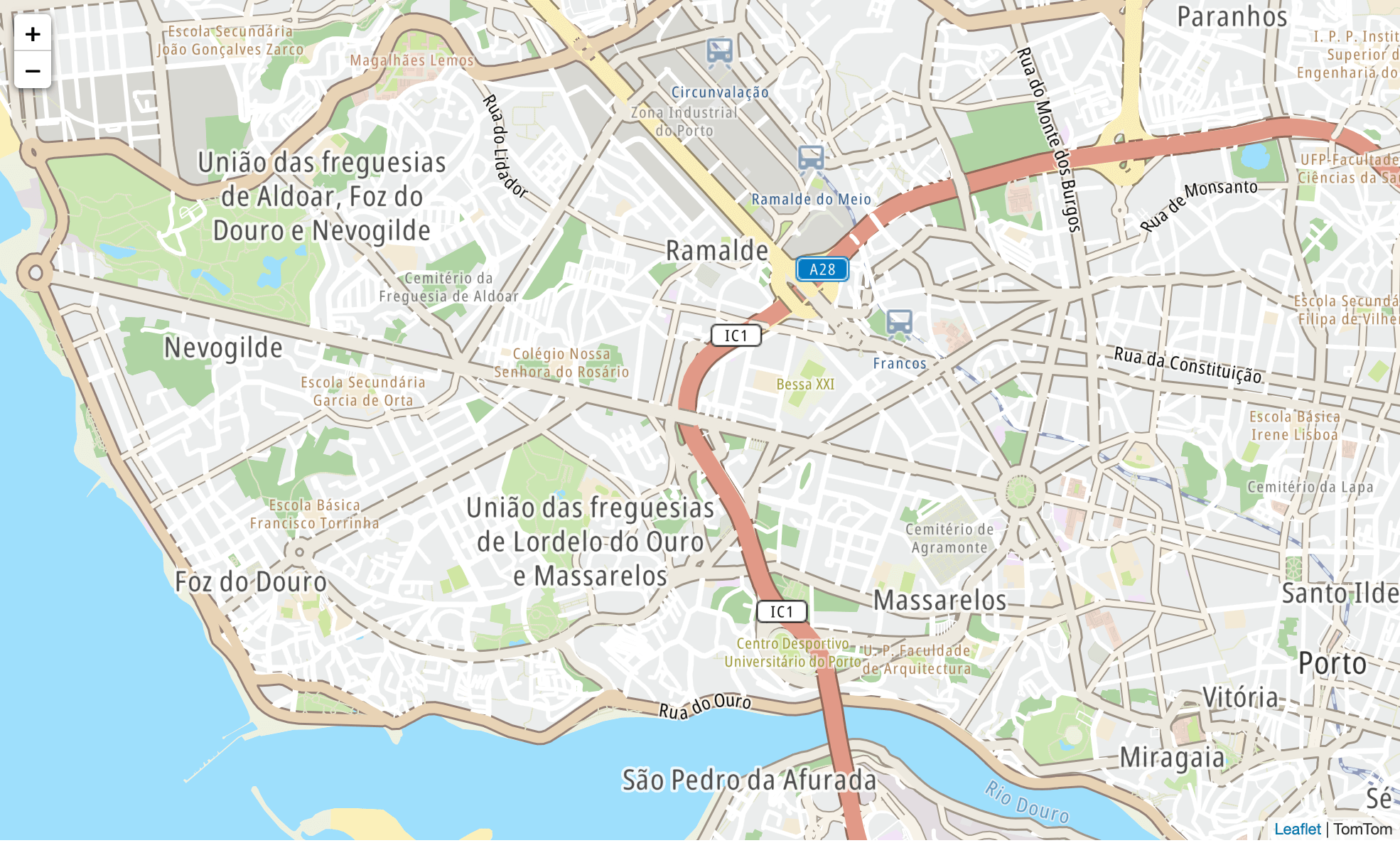 To add a polyline to the map, use the following code: 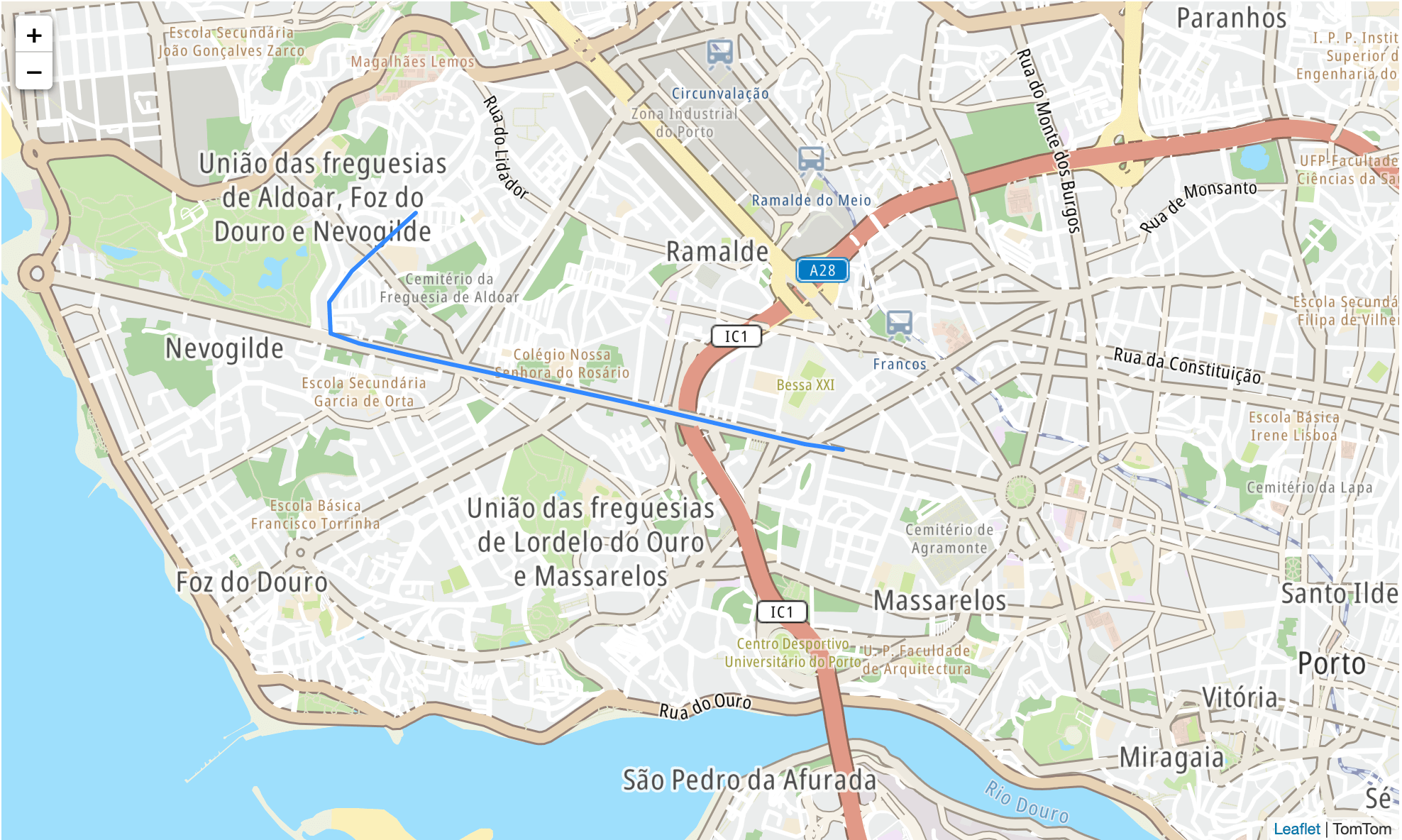 Step 4: How to use the TomTom Routing API

The first taxi trajectory in the dataset is now plotted on the map. Did this taxi driver take the fastest route? We can use the TomTom Routing API to find out.

Of course, traffic situations also influence the routes taken by taxi drivers. Fortunately, there is a way to account for that with the TomTom Routing API, by passing it a timestamp.

Let’s take a closer look at how it works. TomTom uses historic traffic to predict what the fastest route will be in the future. We do this by using temporal speed graphs called Speed Profiles.

For each road segment, we have a graph that shows the distribution of average speed (kmph) throughout the day. Provided we pass the correct day and time (e.g. Monday 16:05) to the Routing API, it will take into account the correct historic traffic distribution when calculating a route.

In order to be able to pass it to the API, we have to convert our UNIX timestamp to the similar weekday in the future, as we can only call the Routing API for current or future routes. We use the following function:

The polylines in the Kaggle dataset are bit noisy. Fortunately, the TomTom Routing API has a route reconstruction option to deal with noisy GPS traces. By supplying supporting points as input to the Routing API, it can reconstruct a route which is matched to the TomTom map.

You can see an example in the image below: 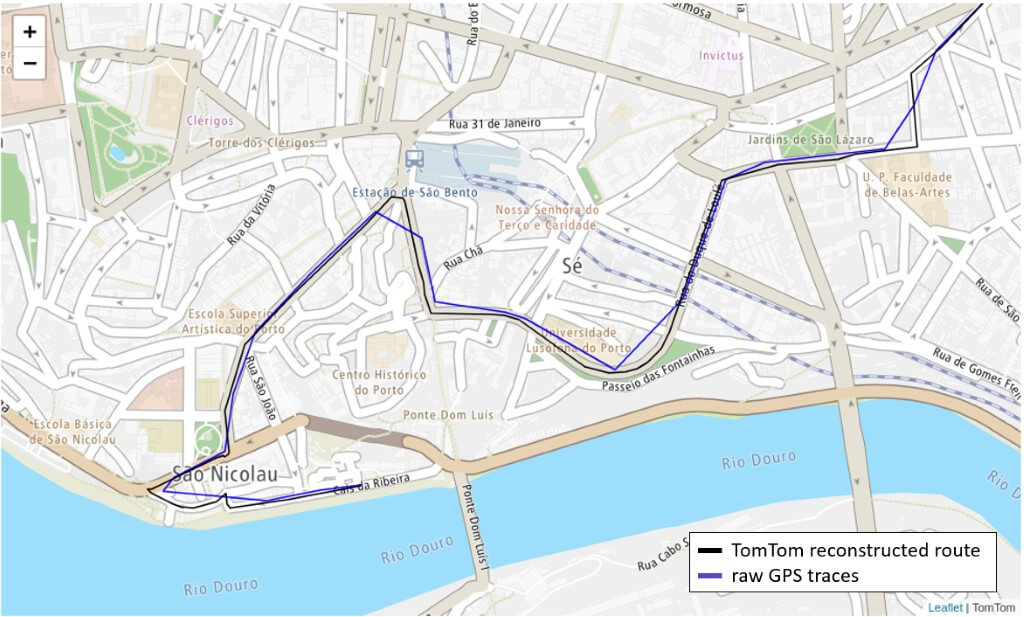 In the next section, we will supply the Routing API with supporting points to ensure it calculates the duration for the correct trace.

Now that we are ready, let's call the TomTom Routing API

We define a function that lets us call the Routing API. As input, you provide it with a polyline from the Kaggle dataset, the corresponding UNIX departure time, your personal TomTom API key and whether you want to compute the taxi route or the fastest route.

The routing function is now ready to be used in our analysis. Let's start with checking the route we plotted earlier:

The travel time is the same, let's also check the routes by plotting them on the map. 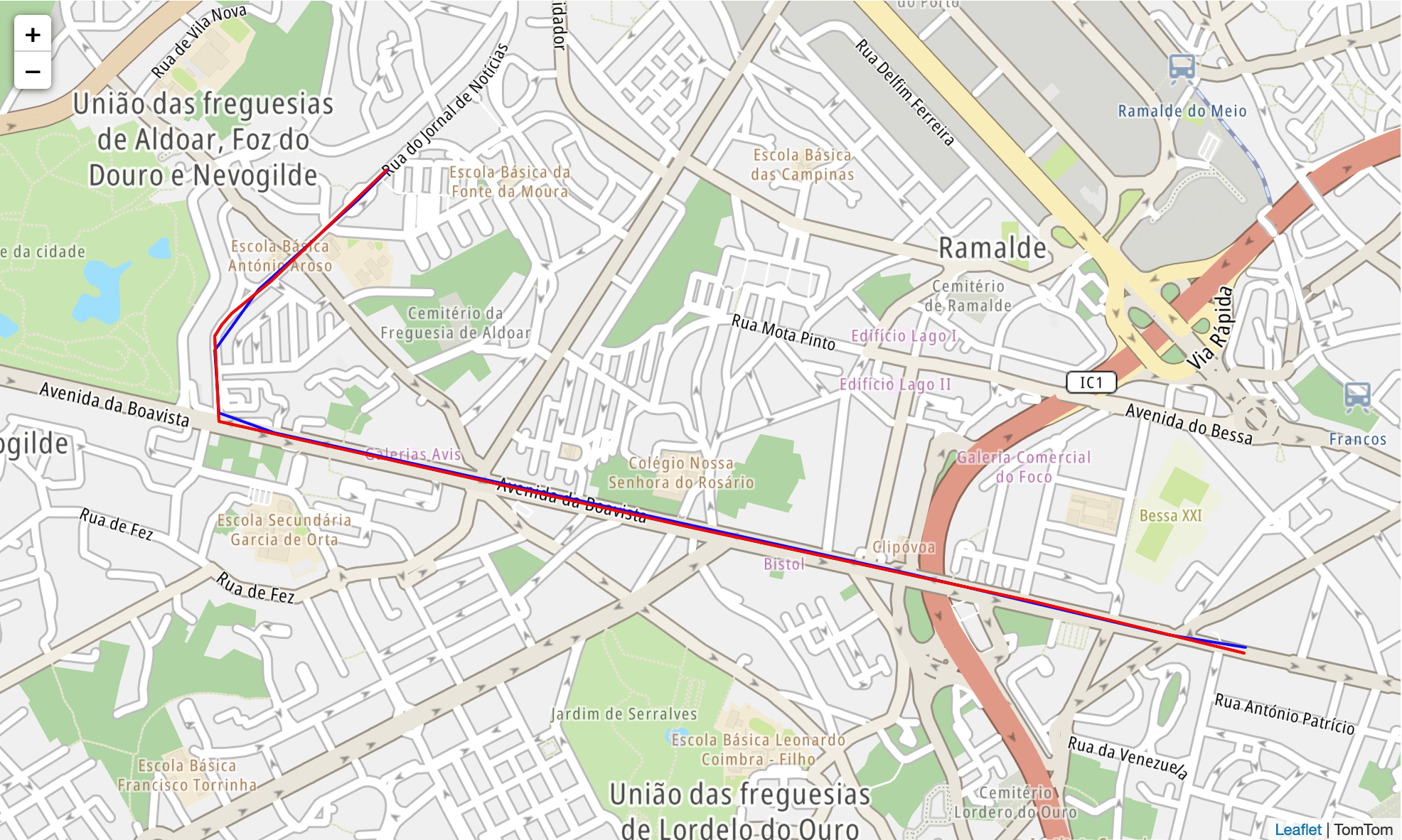 It seems like this taxi driver was honest and took the fastest route, hooray!

Time to scale up

The previous example shows us the difference in seconds between the fastest route and the route that was taken by the taxi driver. The lower the average number, the more honest our taxi drivers are.

To answer the question, we posed at the beginning of the article, we will use a random sample of 1200 taxi trips. This will give us a good idea of whether taxi drivers in Porto take the faster route or not.

A large number like this is of course not realistic. Apparently, some GPS traces are still too noisy causing these outliers. Let's filter them out:

Now that we have our results, can we see what the mean difference in minutes is between the fastest route and the taxi route?

We can also plot the distribution of the difference in minutes and the relative difference, respectively. 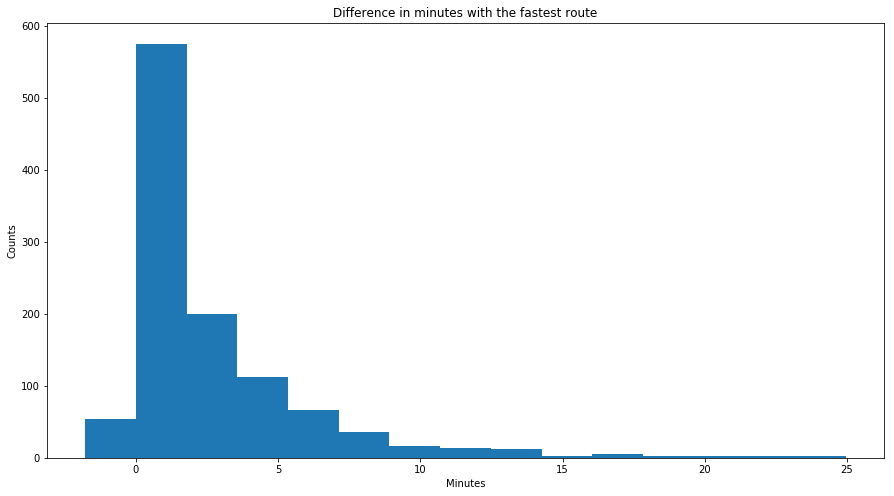 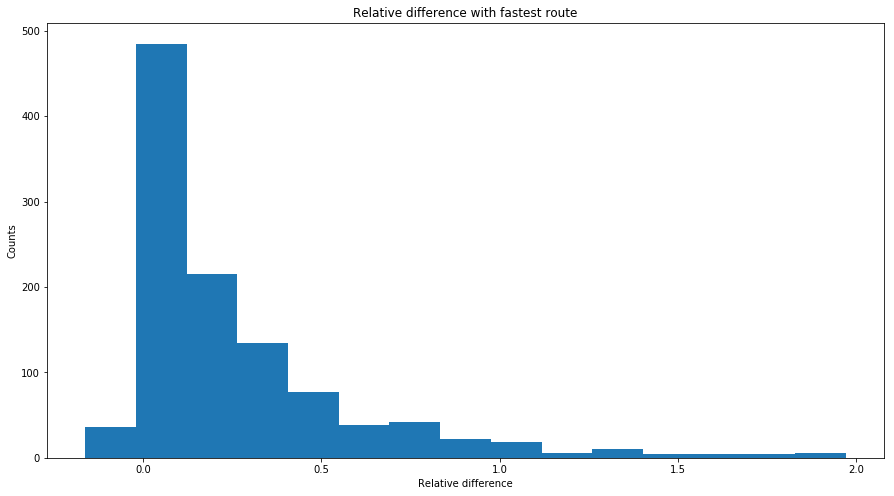 Another way to represent the data is by using percentiles.

From this we can conclude that although most taxi drivers are taking the fastest - or a similar - route (around 23%), there are still quite a lot of trips (16.5%) where taxi drivers take more than 50% longer than the calculated fastest route.

First, we make a linear color scale, where green is no delay and red is more than 50% delay:

We can plot taxi trip delays on the map.

The following plot will show the points where taxi trips started, with the corresponding delay they encountered along the way: 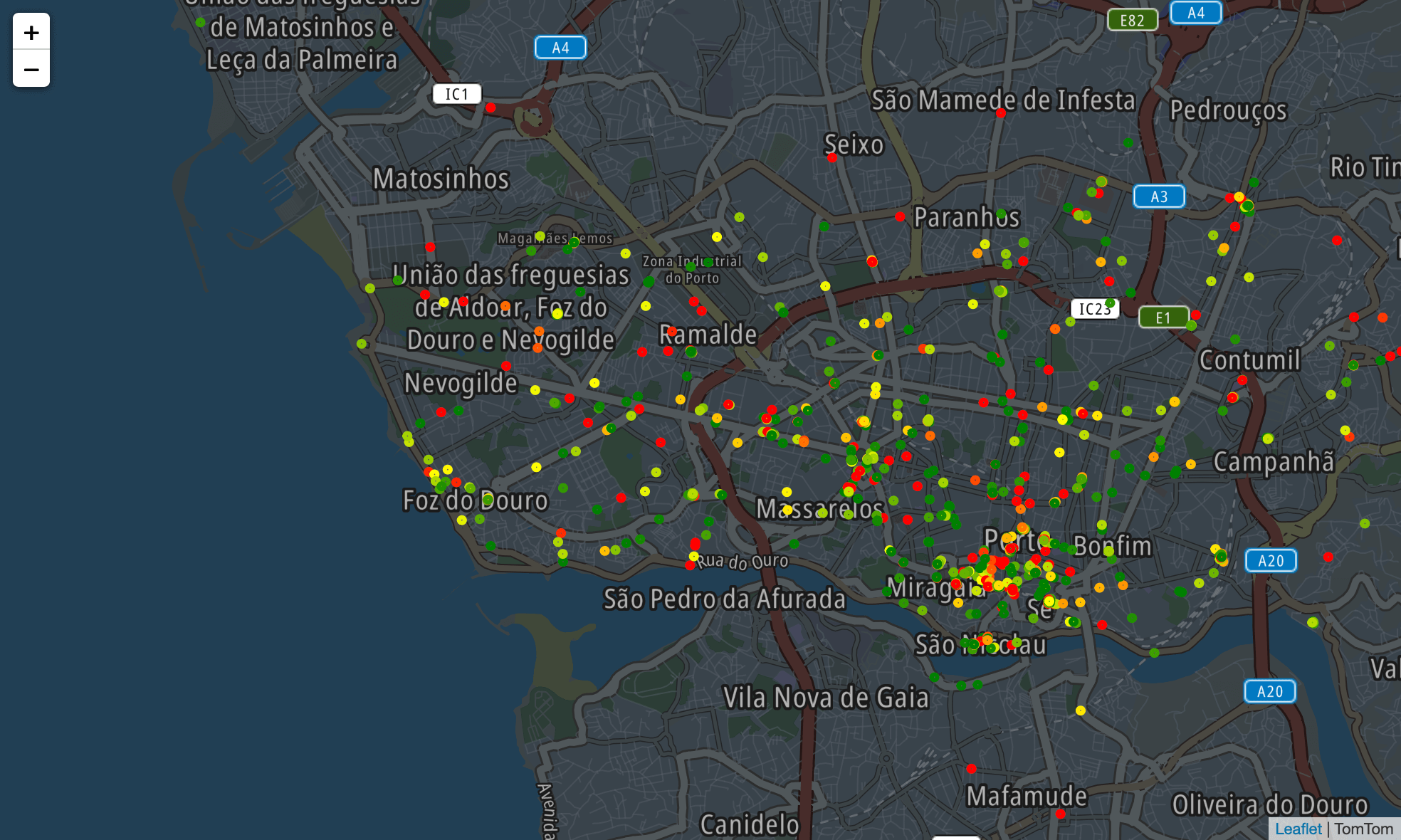 We can also make a (similar) plot that shows the taxi traces with their corresponding delay: 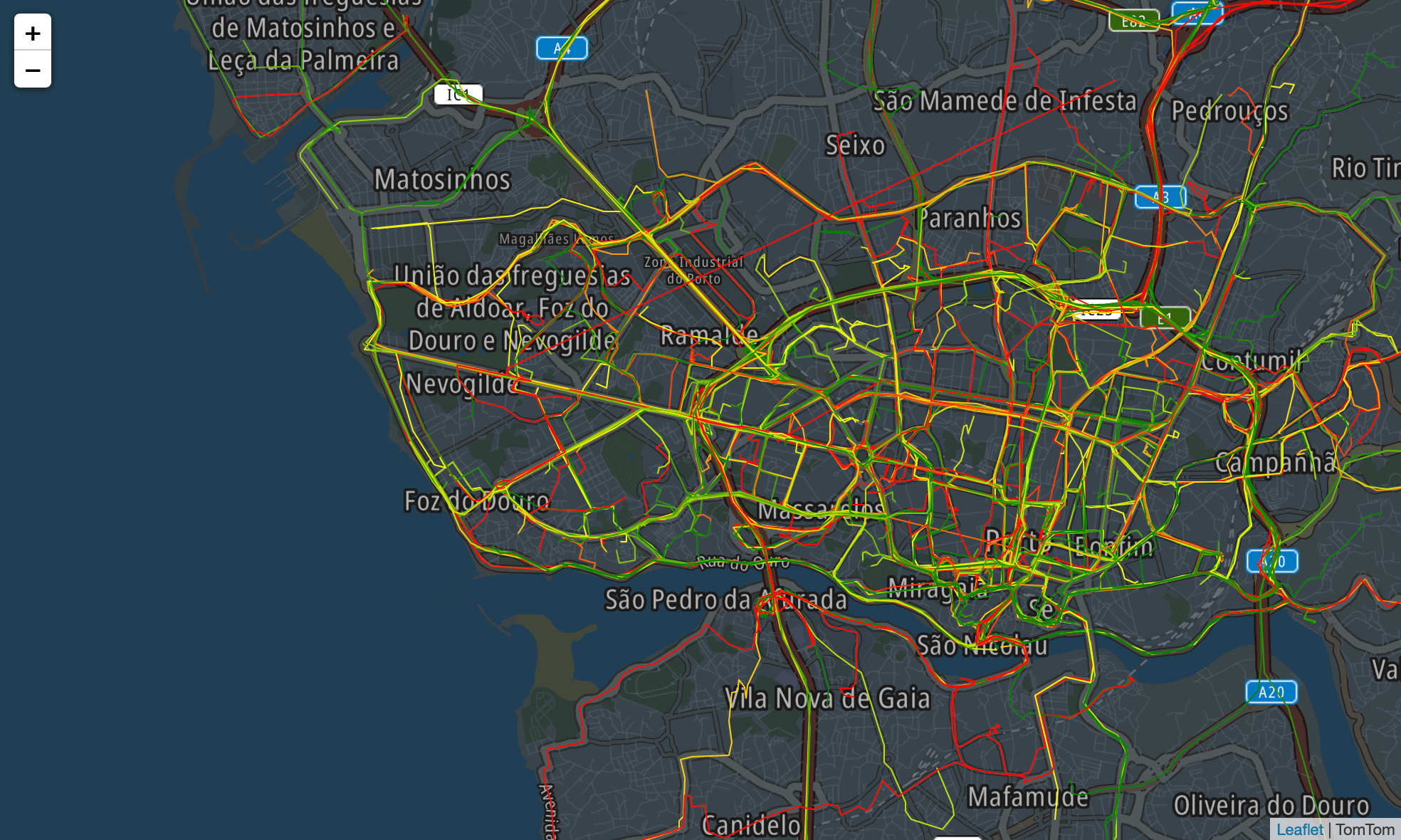 Overall, we can conclude that:

Are taxi drivers taking a detour 40% of the time?

No. Taxi drivers are generally very knowledgeable about the cities they drive in and their experience allows them to outsmart traffic. While the analysis we’ve just performed allows us to draw conclusions, it is important to keep these factors in mind:

You can find the TomTom Maps APIs documentation at to see what else is available. Our APIs cover everything from geocoding to points of interest (restaurants, hospitals, etc.), to solve the needs of developers and their customers alike.