Like everything in TomTom Digital Cockpit, its user interface (UI) also consists of plugins: frontend plugins. They expose panels which contain a visual user interface for the functionality within the frontend's domain. These panels can be seen as pieces of the complete user interface. To enable a high degree of flexibility within the TomTom Digital Cockpit framework, there is no direct coupling between different frontends or their panels, allowing plugins to be independently added, removed, or replaced.

Even though frontends are not coupled, TomTom Digital Cockpit presents the frontend panels to users in a cohesive way. The system UI is a plugin that decides when to show which panel and defines the containers to place the panels in. In common usage, each Activity uses a single system UI instance in its content view; TomTom Digital Cockpit provides IviActivity that does just that. Different system UIs can be used per display, hosted in multiple or a single Activity.

The Model-View-ViewModel pattern (MVVM) used in the system UI

Similarly to how frontends follow the MVVM pattern, so does the system UI. In this pattern:

The model contains the information that the system UI presents in the view. It consists of the complete set of panels exposed by the set of frontends. Each system UI instance can have a different set of frontends, depending on the IVI instance that it represents; see runtime deployment for more information on multiple IVI instances. Frontends decide internally when to expose a certain panel and when to close it. Common situations where a frontend opens a panel include:

The model contains the full set of panels that can be shown. However, it may not be suitable to show all of them at once. There are various situations in which a panel offered by a frontend should not be displayed to a user. The view model decides when to show which panel. It may, for example, choose not to show:

In addition to the panels to show, the view model provides the view with other information needed to properly show the system UI. For example, the view model also informs the view of the active theme or the placement of the main menu based on the product configuration.

The view inflates an Android layout and populates it using the information of the view model. It exposes an Android View which can be integrated in an Activity, VirtualDisplay, or any place where TomTom Digital Cockpit should be presented.

In order to visualize panels, it asks the panel for an Android Fragment. This fragment is implemented within the frontend and contains views as a regular Android fragment would. The fragment is added to the system UI's fragment manager and placed inside a container within the system UI's layout. The container itself may also be a rich component, including style (background color, rounded corners, shadows, etc.), animations (like for showing and hiding panels) and logic (like to swipe away a panel).

Note: Panels should avoid specifying styles, animations, etc. internally, to allow the system UI to create a consistent look and feel across all panels.

It is important however, that the system UI and the frontends integrate neatly. To achieve this, the TomTom Digital Cockpit framework provides a set of contracts in the form of interfaces and classes, that allow a basic level of interaction between the system UI and frontends.

The majority of these contracts are defined in platform_frontend_api_common_frontend. Apart from the core classes Frontend and Panel (see package com.tomtom.ivi.platform.frontend.api.common.frontend.panels), the various predefined extensions of Panel allow the system UI to recognize how to present that type of panel. For example, by having a frontend panel extend NotificationPanel, the system UI knows to treat that panel as a notification, and can judge whether or not to show it based on the priority specified in the NotificationPanel properties.

A SystemUiHost hosts a system UI, which is responsible for providing the system a UI view containing the Frontends within it. It has a layout which is composed of containers for panels. The image below gives an overview of how a stock system UI may look. In this example, the StockSystemUiHost defines a layout which contains the following visible containers: 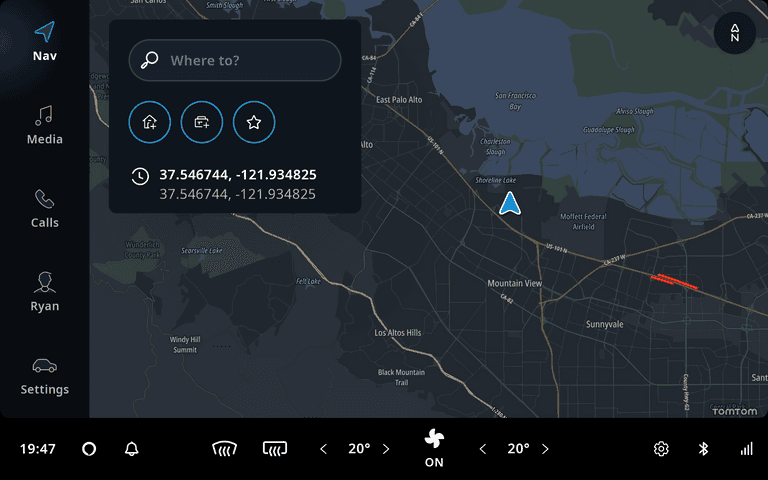 And it also defines containers which are only visible when necessary 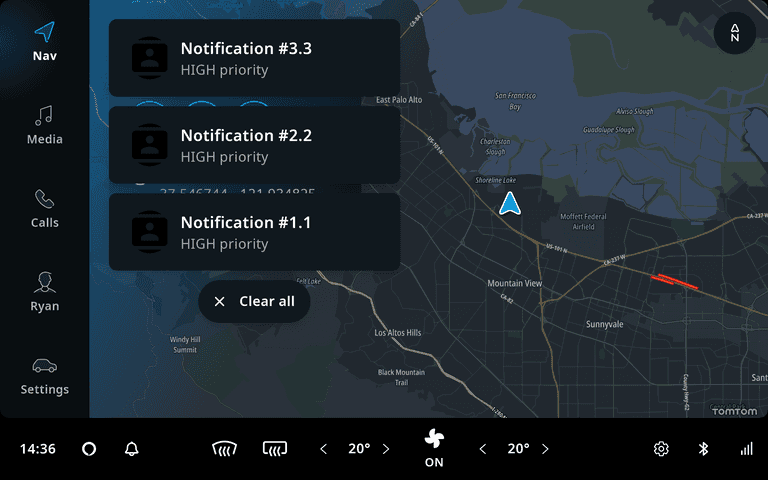 To provide a better user experience, the system UI needs some information to inform the panels about them being overlapped. This is achieved through the SafeArea in PanelContext. The safe area indicates the amount of space from each side of a panel that is not safe to display important content due to the panel being overlapped by others. And each panel can have its own SafeArea.

With safe area, in the example above, the map display home panel can use this information to make sure the chevron isn't shown underneath the main process panel, by moving it upwards. When doing so, the home panel must still draw the map outside of the safe area because that area might not be covered in its entirety. For example, the main process panel has space on either side where the map is still visible.

Apart from SystemUiHost, there are services which are used by the system UI. The sections below provide an overview of these services. 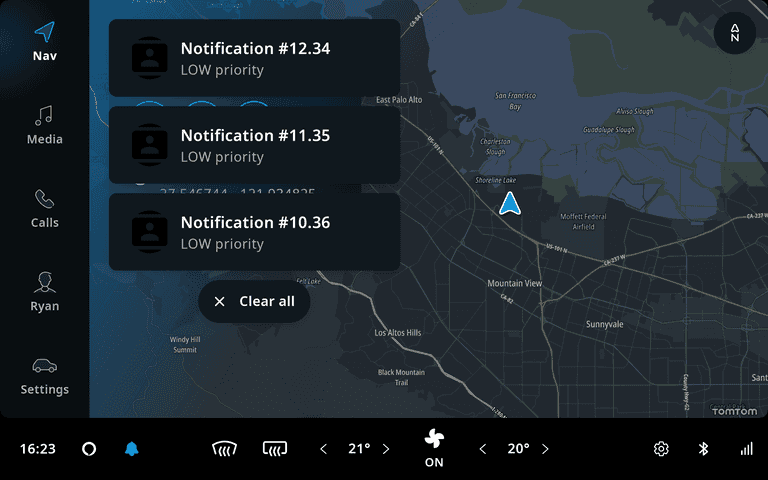