When building, there are a lot of unresolved dependencies

For example, when you get the following compilation errors, then your Nexus credentials may be stored incorrectly or are missing.

Check that you have stored the credentials properly in file ~/.gradle/gradle.properties.

Note: The username and password should not be surrounded by quotation marks.

Note: On some operating systems, a hash character # in the username or password must be escaped as \# to be properly recognized.

If your credentials are properly stored, then the environment variable GRADLE_USER_HOME may point to a directory other than ~/.gradle/. Check this environment variable and move your gradle.properties file to the correct location. You can check where it points to during the build when compiling with --debug and look in the logs for Gradle user home:

If your build output contains Received status code 401 from server: Unauthorized, then Gradle does find the credentials, but the server rejects them. So the credentials are incorrect.

There is no map and/or search does not work

TomTom Digital Cockpit uses an on-board map for its navigation features, but this map is not included in the SDK package or in the emulator image. You must download and install the map separately, as explained in Accessing the Map Data.

The demo maps cover a limited area only. Outside this area, TomTom Digital Cockpit does not show map details, nor can it find a location or calculate a route.

If you need a map for an area not included in these demo maps, please ask your TomTom representative.

How do I open/close the Debug Menu?

Refer to the explanation on The Debug Menu.

How do I start a Route Demo?

A route demo is a simulation of a drive along a currently planned route on the device, this may be useful to see what happens at the various points along the route, without the need to go for an actual drive.

To plan a route, long press on any point on the map, and a route will be planned from the current position, to this location.

In order to allow position simulation, you first need to enable Developer Options in Android:

Attempting to start the Android emulator results in:

and installing the emulator accelerator package from the Android Update Site results in:

The Apple M1 processor is not an Intel-based chip and the hardware-accelerated virtualization package does not work on this processor architecture. Special setup is required to get even the default Android emulator working, so this is not just a TomTom Digital Cockpit-specific problem. Official Android support for this chip is still in progress.

The previous instructions on how to configure an Android Virtual Device, specify exceptions for computers with the M1 processor. Please verify that you have followed those exceptions.

I get an insufficient storage error when installing the APK

You may encounter an INSTALL_FAILED_INSUFFICIENT_STORAGE error when installing the APK on the emulator. Ensure that the emulator AVD has sufficient disk storage configured:

The Android emulator is slow at starting

The emulator may be slow at starting up on some configurations, especially the first time and especially on an Apple Mac.

Otherwise it could be in one of the other .avd directories at that location.

When you have found the config.ini file, you can try a few things:

How do I cold boot the emulator?

In some situation a cold boot of the emulator is required, for example after changing its configuration, or as a precaution when unexpected behavior occurs.

Now wait for the emulator to start up.

I get RuntimeException: Required support for OpenGL standard derivatives is missing

When you launch the application on emulator, it crashes and restarts in a never-ending loop. Look in the logcat and if you get the following error, you need to set the emulator's OpenGL ES API level to 3.1:

Android Studio does not install the application

Sometimes Android Studio does not install your new application after a rebuild but instead launches a previously installed version present on the emulator or target device. To solve this, enable the package manager to handle installs:

Configuration Run IVI Template app as delivered with the SDK has these settings pre-configured. For the example applications you can configure this yourself, if needed. 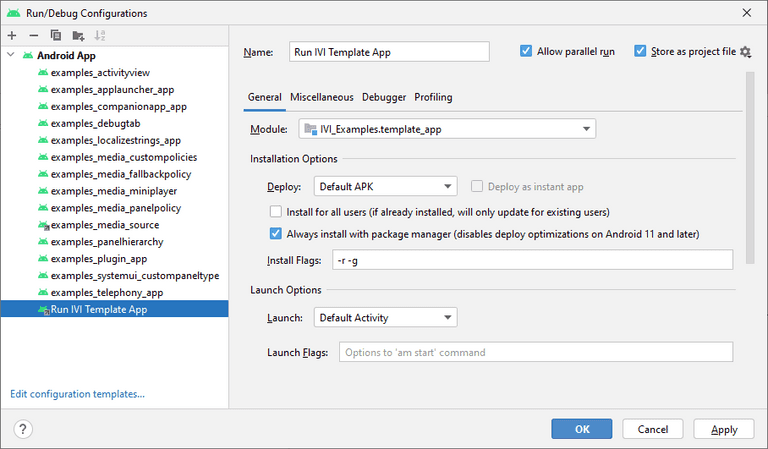 How do I install the APK onto a custom device?

Some features of the TomTom Digital Cockpit example application require system permissions. For instance, you won't be able to play music using Spotify nor use HVAC features. If you want to install the example app on a different emulator or device, you need to make sure that it is signed with the corresponding platform key.

The TomTom Digital Cockpit platform debug key and password files, used for the pre-created tablet and emulator images, are in the keystore directory in the example source. Drop in your own platform keys, replacing the existing ones in that directory, then rebuild and deploy.

An IVI application must tag all its activities to be Distraction Optimized; see more about driver distraction guidelines. To do this, add the distractionOptimized meta-data attribute in the AndroidManifest.xml for all activities and activity aliases. Also see IviActivity.

To be informed by the platform about an incoming call, the IVI application needs to be configured as the system dialer. For example when the stock implementation of the telecom service is used, the command to register it as the platform system dialer is: